Layer 7 traffic management was one of the new features announced today. It will allow for dynamic routing at the application layer, which will support various deployment strategies and improve network resiliency.

In addition, HashiCorp Consul 1.6 adds a new service mesh gateway. The gateway will enable “simplified and secure cross-cluster communication without the need to configure a VPN nor create complex routing rules, enabling the scale needed for multi-platform and multi-cloud environments,” the company explained

These two features are in addition to features HashiCorp has already announced for Consul 1.6. Previously, the company had announced service discovery, service segmentation, and Layer 7 observability capabilities.

“Networking becomes more dynamic and complex with the move to microservices and multi-cloud environments. It is very challenging for network operations and security teams to keep up with the updates to network middleware and manage the increasingly complex network topologies,” said Armon Dadgar, CTO and co-founder of HashiCorp. “We designed HashiCorp Consul to enable service networking across these varied environments by pushing routing, authorization, and other core networking functionality from centralized middleware to the endpoints. This means that the network topology can be dramatically simplified by removing middleware from the network path.”

HashiConf Global: What’s on the roadmap for Terraform 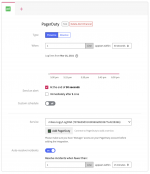