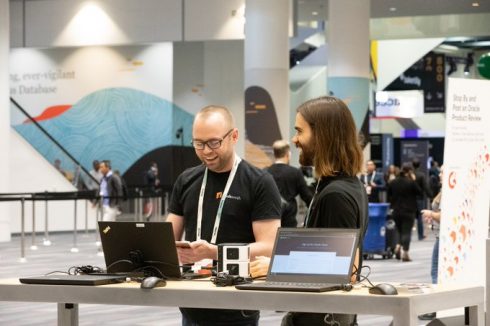 Oracle OpenWorld kicked off yesterday in San Francisco. Oracle used the event to reveal some of its latest offerings, such as Autonomous Linux and Java 13, but a number of other companies are also using the event to announce new products.

This will allow enterprise customers to access Oracle Cloud Applications using an AI assistant in Teams.

“Using Oracle Digital Assistant, business users can simply and conversationally interact with business applications directly from their Microsoft Teams interface just as they would collaborate with their fellow employees or other productivity tools,” said Suhas Uliyar, vice president of AI and Digital Assistant at Oracle. “Completing daily work tasks becomes much more efficient as the AI-trained conversational access doesn’t require additional employee training on different applications. This is yet another way we are enabling customers to run mission-critical enterprise workloads across Microsoft 365 and Oracle Cloud.”

According to Mike Milinkovich, executive director of the Eclipse Foundation, Che allows developers to focus more on the applications they are building because they don’t have to spend as much time worrying about configuration and setup of the IDE.

“Eclipse Che 7 is the culmination of more than six years of community contributions, including more than 20 vendors, delivering a tremendous boost to the productivity of cloud native development on Kubernetes,” said Milinkovich. “As the world’s first Kubernetes-native IDE, Che 7 makes the developer and production environments the same on a scalable, collaborative, and secure platform specifically designed for building containerized applications.”

The company believes this new feature will play a significant role in reducing “disruptive and expensive unplanned development cycles, minimizing costly defects and risks in production.”

According to Data Intensity, this new solution is made up of three components: process automation, integration automation, and intelligent automation.

The company also announced that the virtualization monitoring module of Applications Manager now supports Oracle VM. This will help organizations get a 360-degree view into OCI and Oracle VM performance, receive actionable alerts on issues, and monitor resource utilization.

“In our globally connected world, it’s no longer enough for most organizations to simply migrate to a cloud platform,” said Mark Walsh, principal and U.S. enterprise performance portfolio leader, Deloitte Consulting LLP. “With Deloitte Ascend, we combine our industry-leading practices and digital insights across dozens of industries with deep, award-winning Oracle Cloud experience to help our clients deliver new and compelling levels of performance across their enterprise.”