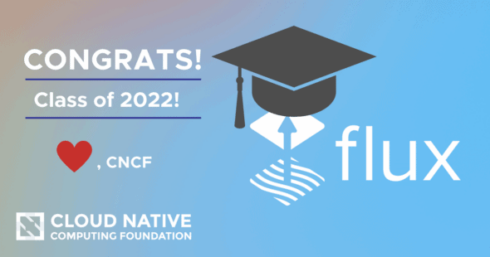 The Cloud Native Computing Foundation (CNCF) announced that the Flux project, which is a set of continuous and progressive delivery solutions for Kubernetes, graduated from the CNCF Incubator.

The project is an orchestrator for microservices and other workloads, designed to automate deployment, scaling, and management of applications running on Kubernetes clusters.

It provides a declarative configuration language to define resources and automate deployment and management of applications. Flux also allows developers to manage their applications and services in a declarative way, allowing them to quickly update and deploy applications without the need for manual intervention.

“Flux has been an exciting project to watch as GitOps becomes mainstream,” said Chris Aniszczyk, CTO of the Cloud Native Computing Foundation. “Flux users have not only adopted advanced uses of GitOps and progressive delivery, but they have done so together with key projects in the CNCF landscape like Flagger, Helm, Prometheus, and more. Flux’s graduation is a good indicator of the success and promise of cloud native technologies.”

The project is used at companies like Volvo, SAP, and RingCentral, which rely on Flux’s enterprise-level security and scale, including its support of Open Container Initiative (OCI) and Cosign for verification.