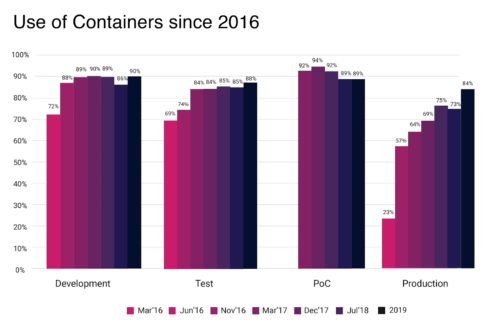 Cloud-native deployments are now the norm. According to CNCF’s community survey, cloud-native projects are increasingly being deployed in production.

The CNCF community survey was conducted in September and October 2019, and the company received 1,337 responses. The goal of the community survey is to understand where and how cloud native technologies are being adopted, the CNCF explained.

According to the survey, many cloud-native projects have reached over 50% use in production. Kubernetes is used by 78% of respondents, Prometheus by 72%, CoreDNS by 69%, Fluentd by 64%, and containerd by 53%.

In addition, service meshes are beginning to take off. A service mesh is an infrastructure layer that is used to enable communication between distributed applications.

Of those using or evaluating service meshes, Istio is currently the most popular, followed by Linkerd, Consul, Netflix OSS Zuul, SuperGloo, Grey Matter, and Vamp.