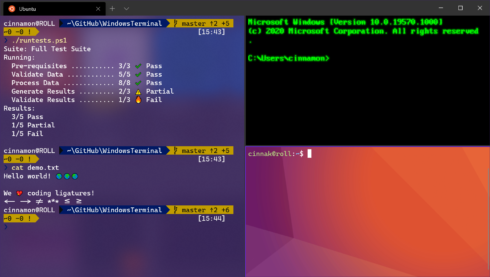 Windows Terminal was first announced last year at Microsoft Build, and one year later, Microsoft was able to launch version 1.0 at Build 2020.

Windows Terminal is a result of Microsoft wanting to improve the command line experience on Windows without breaking backwards compatibility for its existing consoles and shells.

“The Windows Terminal is a complete rewrite, a complete reconception of a first class terminal on Windows, under which you can run n-number of shells. And that can be a little bit confusing as well until it’s completely integrated and folks just start naturally using terminal rather than console. But one of the things that is really important to Microsoft is now breaking a billion machines. So we can’t just swap it out because there’s a bunch of enterprises out there wanting the console to work the way the console does. So they have to live and work together and get along,” Scott Hanselman, partner program manager at Microsoft said in an episode of SD Times’ What the Dev? podcast.

By default, users can launch PowerShell, the command prompt, and the Azure Cloud Shell from the Terminal. If Windows Subsystem for Linux (WSL) has been enabled on the machine, Linux shells can be accessed too.

It allows users to customize each shell by setting a profile for each command line application. Shells can be opened side-by-side as panes for easy viewing and access. Customization options include custom key bindings, color scheme, fonts, and the ability to add background images, including GIFs.

Windows Terminal 1.0 also takes advantage of GPU rendering for text. According to Microsoft, this provides a faster experience. The renderer also offers support for Unicode and UTF-8 characters.

Starting in July, Microsoft will begin releasing monthly updates. Windows Terminal 1.0 can be downloaded from the Microsoft Store or by downloading it through GitHub.