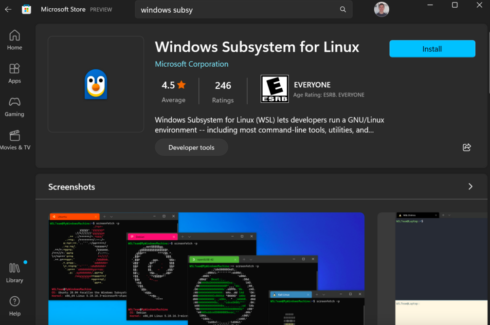 Microsoft has made the Windows Subsystem for Linux (WSL) generally available in the Microsoft Store, removing the preview label from the store listing. WSL enables developers to install a Linux distribution on their Windows machines,

With the latest release, WSL is now available in the Microsoft Store on both Windows 10 and Windows 11. This gives Windows 10 users the ability to utilize the latest WSL features, such as systemd and Linux GUI app support.

According to Microsoft, this will make the versioning simpler, because there are two types of WSL distros: WSL 1 and WSL 2, which have different architectures, in addition to the “in-Windows” and Store version.

“With this update our goal is to simplify our versioning story. Since WSL 2 is the default distro type, and the Store version of WSL is the default install location, you can just say: WSL is an app in the Microsoft Store that lets you run actual Linux that integrates directly into Windows,” Craig Loewen, program manager II for the Windows Developer Platform, wrote in a blog post.

New features in the latest release include the ability to opt in for systemd support; –import-in-place, which takes and registers a .vhdx file as a distro; wsl –version, which prints version information, and better error printing.

The new features in wsl –mount in this release include a new option for easier mounting of VHD files and a new option to make naming mountpoints easier.

In addition, both wsl –import and wsl –export now offer the option to import or export to a VHD directly.