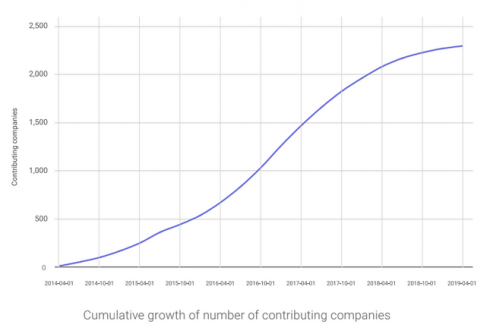 It should come as no surprise that Kubernetes has skyrocketed in popularity. Since joining the Cloud Native Computing Foundation (CNCF), the project has seen widespread adoption and it seems to be all anyone can talk about in the industry.

Since it joined the CNCF, the number of companies actively contributing to Kubernetes has grown 2,000 percent, from 15 to 315 companies. And the number of individual contributors has grown from 400 to 3,000. This is according to the CNCF’s Kubernetes Project Journey Report, the first of a series of similar reports.

The report also found that there is now greater code diversity within the project. Prior to Kubernetes joining the CNCF, Google and Red Hat contributed 83 percent of its code. Now, those two companies only contribute 35 percent of code, although their contributions continue to increase. “This indicates a healthy dynamic where the project originators continue to contribute high volumes of code but have also encouraged other organizations to contribute a greater percentage of code over time, sharing stewardship and growing the community,” the CNCF wrote in the report.

“What’s more, we think that Kubernetes has a lot more room to run – as do many other CNCF projects that are also growing quickly,” the CNCF wrote in a blog post.

Being the first project to graduate from the foundation, it makes sense that the CNCF would decide to start with Kubernetes, but it claims that it will be releasing similar reports for other graduated projects as well.

According to the CNCF, the goal of the report was to explain its “nurturing efforts and some of the positive trends and outcomes we see developing around our hosted projects.”

Networking problems after installing Kubernetes 1.25? Here’s why and how to fix it