Survey points to rise in PaaS, container and serverless deployments this year

Deployments of cloud-native applications in platform-as-a-service (PaaS) environments are on the rise this year and organizations are in large part building and running these new apps in containers, according to a report released last week by the Cloud Foundry Foundation. The report also shows an uptick in those building serverless applications, also known as functions as a service (FaaS), which don’t have infrastructure dependencies, thereby designed to support multiple cloud environments.

Among 600 IT decision-makers polled in late May by public opinion research firm ClearPath Strategies, 77 percent are considering or already using PaaS as their runtime environments for cloud-native apps. The percentage of those who have PaaS environments in production rose to 47 percent since last fall, up from 31 percent a year ago. 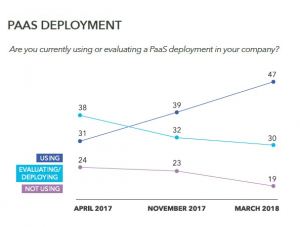 Similarly, 72 percent said they are building new apps or migrating existing ones in containers, with 30 percent saying those applications are in production. And 46 percent are evaluating or deploying these new cloud-native apps in serverless computing environment. 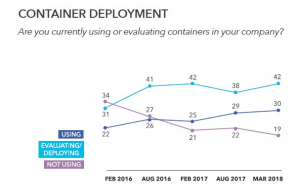 All three deployment options (PaaS, containers and serverless) collectively are now playing a role in application migration efforts, according to 39 percent of the survey respondents. The findings suggest that organizations are increasingly evaluating and embracing these cloud-native software development and deployment frameworks as an alternative to lift-and-shift migration of traditional apps and web-tier systems to hybrid infrastructure as a service (IaaS).

The data also points to a measurable uptake over the past six months of cloud-native apps running in PaaS built in containers or designed to run in serverless environments such Amazon Web Services Lambda, Microsoft Azure Functions and Google Cloud Functions.

Overall, Cloud Foundry Foundation CTO Chip Childers believes the findings show a meaningful uptick. “We’ve reached a point where people aren’t just talking about it now they’re actually doing it,” Childers told ITOps Times. The fact that more than one-third are using or evaluating PaaS, containers and serverless, in tandem, is also important, according to Childers.

“They’re actively using multiple abstractions,” he added. “It speaks to the ways that different cloud technologies are doing a very good job of working well together and servicing different needs of the developers. Sometimes they just want to run a function in a public platform. Other times they want to run a whole monolithic legacy application. They can wrap that container.”

Tom Petrocelli, a research fellow at Amalgam Insights, said he wasn’t surprised by the report’s findings. “The trends are what we have been seeing for a long time,” Petrocelli said. “PaaS and containers adoption continue to grow, and companies use a variety of platforms to meet their needs.”

Despite increased adoption of these technologies, cloud-native implementations are still at the early wave of maturity. As of last fall, 20 percent of organizations were running container-based applications in production, according to Gartner, which predicts that figure will rise to 50 percent in 2020. Over the past six months, Gartner has also raised its forecast usage of PaaS. The researcher now projects revenues this year will top $15 billion, up from $11.9 billion last year. Back in October, Gartner had forecast $14.2 billion for this year and $11.2 billion in 2017. Gartner’s current forecast calls for $18.6 billion in 2019, $22.7 billion in 2020 and $27.3 billion in 2021.

Nevertheless, the Cloud Foundry Foundation is a non-profit consortium focused on the adoption of the open-source Cloud Foundry PaaS project. It has key backers including Dell EMC, Google, IBM, Microsoft, Pivotal, SAP and SUSE, and many large organizations in key verticals including manufacturing, telecommunications, healthcare, government, insurance and financial services are at various stages of deploying hybrid applications running in Cloud Foundry environments.

Childers said he was confident in the survey’s findings and noted this survey looked broadly at PaaS, containers and serverless in general, and not specific platforms or products. “It’s more about the concepts or the type of abstractions,” he said “Of course, Cloud Foundry is a huge part of the PaaS market overall not just for [on-premises] but there’s all the public cloud providers that base their platform as a service on the Cloud Foundry applications runtime. And now we’re also increasingly seeing Cloud Foundry technology show up in the enterprise as one of the routes to deploying and managing Kubernetes.”

Also, a major part of PaaS is OpenShift, available on Red Hat’s popular Linux distribution. Red Hat last month reported strong demand for OpenShift. While the company hasn’t broken out specifics, RedHat said it has added 100 OpenShift customers. The number of OpenShift customers grew 75 percent year-over-year and 70 percent of them are also Red Hat middleware customers, according to the company.

Like Cloud Foundry, containers are facilitating OpenShift adoption, accelerated by wide industry support for Kubernetes, which will play a role in providing interoperability between the Cloud Foundry and OpenShift environments. Childers said Red Hat is among those that support the Open Services Broker API (OSBAPI), which is evolving and “rapidly becoming the standard for how these backend services get integrated with the different developer abstractions.”