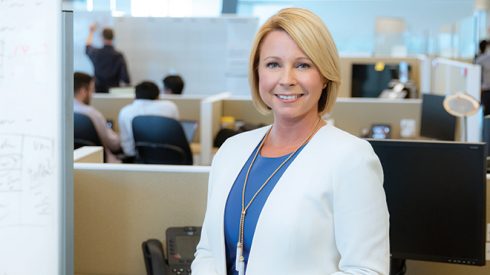 ServiceNow has charted impressive growth over the past year. The company reported nearly $2 billion in revenues in 2017 and is forecasting $2.35 billion for this year. In the last quarter of 2017, ServiceNow said it closed 41 deals worth $1 million or more and 500 customers are now spending at least that amount yearly with the company, up 43 percent. In January, the company released its Kingston release and will disclose its forthcoming London rollout next month. Leading ServiceNow’s ITSM, ITBM and ITAM business is Farrell Hough, who talked about the where service management is headed this year.

Can you describe some of the Virtual Agents coming in the next release?
When we talk about user experience, this is shifting out of the box experience and providing a conversation design interface, is what we mean by making it easier to consume this type of technology. An example of this is checking status of any incident that you will build out a conversation tree and design it to account for scenarios around checking the status of an incident, or of a change or an outage. Some of that is a very administrative-type thing and it’s very basic. It’s a go and get and retrieve. Those kind of out of the box conversations are going to help customers get started quickly and get value quickly with virtual agents. Another example might be to say, provide me the latest comments on that incident, help me work through a password reset, retrieving knowledge articles and working through certain steps might look like. Those are examples of those out of the box conversation.

What other areas of ITSM are you investing in?
Incident management. That concept of a major incident can extend into a lot of different business frameworks. One, every company can decide what qualifies as a major incident. You don’t want to have to be thinking, ‘who do I have to communicate to, what type of notification, what should the content of that notification look like?’ You really want to be focusing on remediation, and working to get the situation under control, and deploy a fix if you needed to. The way we structured the major incident management workbench, is giving you a lot of templatized ability to pre-script steps or task that you want to execute. So, you’re orchestrating communication, you’re orchestrating the remediation that’s happening during this major incident, you’re not reacting to it.

Could it also apply to a major ransomeware attack, or some other security incident?
Yes. It’s a good place where security and IT interact. I focus mainly on the IT side. But a major security incident would be an interface into major incident management. Typically, organizations will have their own criteria for what is a major security incident where other resources have to be engaged. But IT and security react together when doing incident response and ultimately remediation. Another great area is an extension of incident management that we will reconfigure is for business crisis. A business crisis could be a local major disaster, or someone in the field that internal employees need to be aware of. It could also include putting out those kinds of communications and orchestrating how those need to be handled and who has to do what ahead of time. So, when you are in the moment you are just executing. Those are the things we want to be thoughtful about end user experience where we will make work easier and people’s’ jobs easier to do.

What role does the new Integration Hub service that you released with Kingston provide?
Basically, it’s a location for all of our integrations that we would have out to third parties and we will be working with third parties and partners, where we will be able to build integrations themselves in that context. It will almost be an orchestration capability that will tie into our workflow over time.

Can you describe what the new no-code automation feature introduced in this release means?
We put out our first version of low-code no-code workflow design, and that is called Flow Designer. I am really excited about it because I feel like it democratizes the ability to build process, and you don’t have to dig into, and you don’t have to resort to coding or scripting right away. A business process manager who normally would write up the requirements of what that would look like and rely on a developer to code it, doesn’t have to do that anymore. It will make work more meaningful, one for developers to work on something more fun that making a process change, but also for a business process manager to feel more autonomous and to feel more ownership over the processes they’re overseeing or are caretakers for. I do think we’ll see where it goes, in terms of any friction of alignment that maybe there, from a DevOps standpoint. If we’re having a little bit less reliance from an engineering standpoint, what does that look like? I don’t have an opinion yet, but I can see they’re tangential. We have a lot of engineering when we have these low-code no-code capabilities. What does that look like from a DevOps type of view? I think we’ll wait and see.

Do you have any predictions how might play out?

I’m an optimist. I feel like we’re going to have more meaningful work. Right now, this technology is evolving – right back to automation. Whether it’s supervised or unsupervised, we are creating more meaningful work for people. We are taking away the mundane to where it gets done faster and better. I think it will be the same extension here. I believe in allowing people to develop skills and say you can change processes in a low code no code way. I love that about technology and I love that about our platform. We are evolving peoples’ jobs and starting to make work more meaningful. I think that’s important.

I’m wondering with the new support for chatbots such as Slack and Teams, how many of your customers you see embracing that, and is it ready for prime time when applied to ITSM?
It will be interesting. I don’t have any stats in terms of what percentage of our customers are leveraging which collaboration tools or how any. My gut tells me, unless it’s heavily regulated by IT, it’s such a game of preference. I think there will be organizations that have multiple collaboration tools and I think it will be important for us to keep up with integration and not going all in with one over another. Because there’s a lot of fluidity there and less loyalty, again, unless mandated. I can see that in some industries and not others. But the thing I like about it is it’s going to where people are and letting them, it goes back to that user experience theme, which is allowing people to work is the most frictionless way possible and still get their jobs done. It’s no longer requiring people to be I front of a laptop or desktop in the office to get their work done. Just like in our consumer lives where we live on our phones where we are able to multitask and do all sorts of things on our commute home or on the sidelines of a soccer game, we can approve something or very quickly make a dinner reservation. We should allow this capability of people want it. These integrations are going to improve the user experience overall, and I think improve productivity.

To what extent are you seeing these organizations move their ITSM that’s now on-premises into the cloud?
Roughly 97 percent of our customer base are in the cloud. I don’t see that changing. We have a lot of customers that are strategizing – maybe a more traditional company that had everything on prem and starting to move things to the cloud over time. It would be difficult to say that our entire customer base or even half of them would be 100 percent cloud only. It takes a lot to unwind what might be on prem. I think we will have a mix for quite a while, unless you are a net new business or a new group that wants to deploy everything into the cloud.

What’s your take on the role of ITIL in service management these days?
I will say the influence of ITIL are across all of our IT Service Management customers, but it’s very clear it needs to be updated. I will say we see less and less of our customers who are interested in pure ITIL compliance, they’ve really evolved, and focus a lot of service management concepts, enterprise service management concepts or maybe even new framework like FitSM. Or also things like [The Open Group} IT4IT. There are additional frameworks that are appearing more relevant or evolved than where ITIL is today but it is a great common language. When we go back and are interfacing with our customers, it creates a taxonomy. But we see much less rigor around adherence to ITEL processes, unless it’s potentially in a heavily regulated organization, they might lean on the rigor of ITIL but we just see it less and less.