Jobs and training to get a boost of AI and blockchain 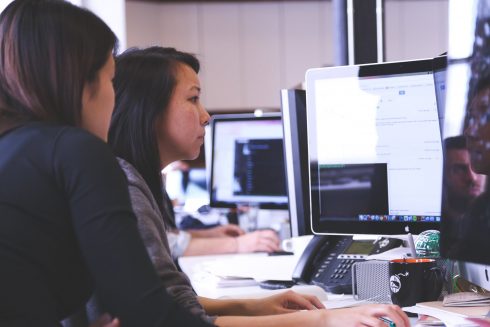 Online training and jobs marketplaces are nothing new, but one startup believes it has found a unique way to bring the two together with a blockchain platform that uses artificial intelligence (AI).

The forthcoming platform, under development by Expercoin, is the outgrowth of Experfy, an early stage company incubated by Harvard University Innovation Labs. Expercoin will enable an online marketplace of training content, but will also allow for organizations to recruit knowledgeable workers whose training and certifications align with available jobs.

“We determined that you have to bring work and education together if you want to be effective at addressing the skills gap,” said Harpreet Singh, who co-founded Experfy with Sarabjot Kaur. Because Expercoin runs on an Ethereum-based blockchain, which exchanges transactional data in the form of a distributed general ledger, Experfy aims for employers to be able to validate that those applying for jobs have the skills or certifications required.

Expercoin will apply AI to automate the various communities and marketplaces. It will also enable an adaptive learning system to deliver courses, and will use AI to offer  hands-on coding exercises and capstone projects, according to the company.

Expercoin extends the concept created by Experfy in 2014, which built its own community of data scientists to provide training for large Fortune 500 enterprises. Presently, Experfy claims 30,000 data scientists as part of that community, all available for hire in its marketplace for freelance or long-term assignments.

The data scientists associated with Experfy provide on-demand consulting services to companies that require those with specialized skills. But they also build their own reusable course content, available in the marketplace. Experfy started its project marketplace with customers that include Gulf Oil, Keurig Green Mountain, Macy’s and Deloitte Consulting.

Looking to move beyond providing training and jobs marketplaces for data scientists, Experfy decided that rather than try to scale it out, it was more practical to enable others to create and govern their own communities, tied to a specific vertical or horizontal skill sets. Experfy started to “white-label” its training marketplace to interested parties. The first to sign on was the Commonwealth of Massachusetts.

“We decided to take this solution we have, white-label it, but also put it on the blockchain so we can get some additional efficiency from that, from smart contracts especially,” Singh said.  Smart contracts are binding agreements between parties in transactions written into code and embedded in the distributed blockchain.

Expercoin supports front-end applications and a protocol layer that allows programmers to build autonomous organizations it calls “Republics.” Each Republic can create its own custom community with marketplaces covering six pillars: assessments, jobs, mentorships, training, financial aid and a corporate academy.  “We’re taking the philosophy of Experfy and making it available to anyone at scale,” Singh said.

The plan when Expercoin goes live in January is to launch at least 17 such Republics, though Singh is hopeful of exceeding that figure. One Republic is Project Starfish, an effort created by Subhashish Acharya, his wife Soumita Acharya, and some friends brought together through crowdsourcing. Project Starfish offers its workforce development and simulation platform to create opportunities for the blind, veterans and those looking to launch new careers.

By creating a Republic on Expercoin, Acharya says employers can find talent with assurance that they have the required skills. “Everything they do is recorded on the blockchain, meaning how many days they attended and what kinds of projects they have done,” Acharya said. “All of these critical elements that an employer wants is recorded on the blockchain, that means it is verifiable, tangible and it is based on authentication.”

Expercoin created a protocol that lets developers build DApps, which are decentralized digital applications designed to run on blockchain and peer-to-peer networks. The DApps, developed either in Ruby or in Solidity, a language similar to JavaScript designed for smart contracts, are plugin-style apps that run on the blockchain. Expercoin operates on Amazon Web Services (AWS) compute with IPFS distributed storage, which supports any indexing server, Expercoin’s Singh said. The DApp creates JSON objects that are pushed to the IPFS network for validation.

The AI and analytics are enabled by Apache Spark services provided by Amazon’s Elastic MapReduce (EMR), which provides access to Hadoop ecosystem applications such as Hive, Pig, Tez and Presto, along with analytics tools such as RStudio, Shiny, and sparklyr, according to Singh.

In an effort to raise $26 million, Expercoin launched a pre-sale initial coin offering (ICO) on the cryptocurrency markets from June 1-July 31. Singh can’t say how much was raised as of late August, pending a filing with the SEC, but numbers should be available sometime later this month, he said.

Tarun Khanna, a professor at Harvard Business School is among those investing in Expercoin. “Experfy is a pioneer in this space and will enable the development of marketplaces through its technology stack,” he said. “By leveraging blockchain and AI, we hope to push the frontiers of innovation for both consulting and training space.”