Report: Only half of organizations are currently deploying Kubernetes in production 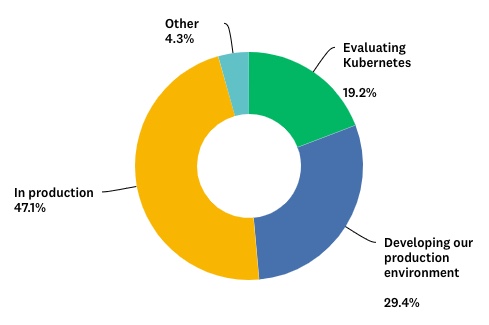 Despite its seemingly large presence, Kubernetes may not be as widely adopted as it seems.

Platform9 conducted a survey at KubeCon EU in Barcelona this month, speaking with over 500 attendees. Through the survey, the company said it was able to understand how companies are currently using Kubernetes.

“These early adopters organizations are spearheading the digital transformation revolution and many, many mainstream enterprises will follow in their footsteps and see success with Kubernetes in production in the very near future,” Platform9 wrote in a post.

Half of the respondents cited operational complexity as the biggest barrier to Kubernetes adoption. “While it may be relatively easy to deploy Kubernetes initially for experimentation and Proof of Concepts, operating it at scale, monitoring and alerting, maintaining high availability, and achieving non-disruptive upgrades is enormously challenging,” Platform9 wrote.

Another forty percent stated that they were struggling with migrating legacy applications to Kubernetes.

Finally, Platform9 found that CI/CD automation and containerization of legacy apps were the top use cases for Kuberentes.