Kubernetes and Minecraft: What do they have in common? 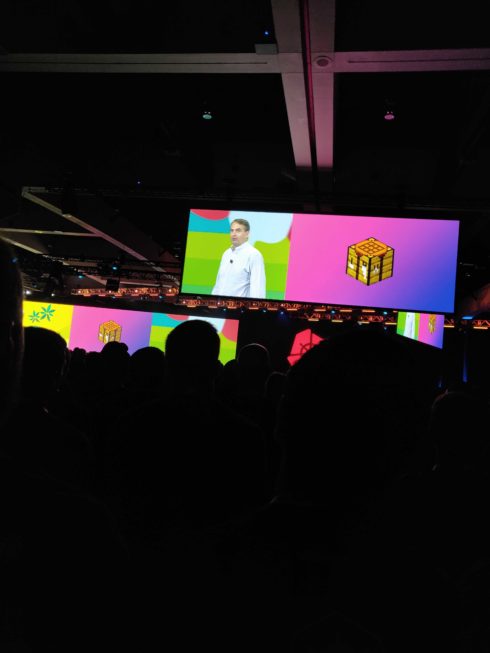 Kubernetes is only five years old, which means that while it has already gained immense adoption in the enterprise, there are still those who are beginning to learn about it. This week’s annual KubeCon in San Diego is a great place for people to do just that.

Dan Kohn, executive director of the Cloud Native Computing Foundation (CNCF), kicked off the event with a keynote where he compared Kubernetes to the video game Minecraft.

He recounts that his son Adam installed Minecraft on an iPad. Kohn noticed that his son was staring at the iPad, but that the screen was completely black. “‘Why are you staring at a black screen?’ I asked. ‘I’m hiding from the zombies,’ he replied. ‘I don’t see any zombies,’ I said. ‘The zombies come out when the sun sets,’ he explained. ‘The screen is black,’ he said, ‘because I’m hiding in a hole in a hill.’”

His son hadn’t yet figured out how to defeat zombies, but he had figured out that he could dig a hole in the ground with his hands and close it around himself at night. Applying this metaphor to tech, Kohn explained his second grader represents most enterprises, while the zombies represent software failures that would cause downtime. Hiding in a hole is like using precautionary software practices, like long release cycles, infrequent dependency updates, and manual quality assurance.

Kohn says that neither his second grader or these enterprises were acting irrationally. “The zombies are real. Precautionary practices are reasonable responses,” he said.

Going back to his Minecraft story, Kohn revealed that his second grader invited the older sibling of one of his classmates over: a fourth grader. The fourth grader showed his son how to actually craft things in the game. “Minecraft is as much about mining as crafting,” Kohn said. “And my second grader had figured out how to mine all on his own. Or at least how to dig with his arms. What he didn’t know was how to craft. And crafting is critical to the whole game… The lesson of Minecraft is that you can take simple things and combine them together into much more powerful complex things to build very powerful tools.”

Kubernetes itself is also a lot like Minecraft, according to Kohn. It’s built on a lot of foundational technologies, but it’s also like a crafting table itself. “It is a kind of alchemy that turns simpler things into more powerful ones. Kubernetes, in short, is like Minecraft. You have all the tools you need to build what you want, and even tools to build new tools. But what we construct is up to us,” said Kohn.

And at KubeCon and CloudNativeCon, attendees are doing the same thing as Kohn’s son and that fourth grader, he explained. Second graders (or first-time attendees) are coming together with fourth graders to learn about Kubernetes and the power of it. “The second graders will soon enough become fourth graders,” said Kohn. “And our community, where democratization is a core value, is eagerly looking for people who can contribute new and improved crafting techniques. Kubernetes is only five years old, which means that we’re all still in elementary school. I look forward to seeing what we will learn together.”