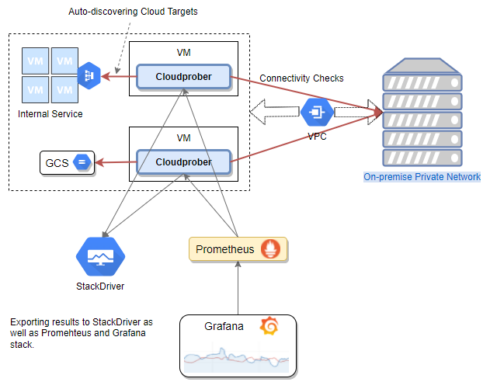 Cloudprober is a monitoring software that makes it easy to monitor the availability and performance of various components of one’s system.

“Cloudprober’s main task is to run probes. A probe executes something, usually against a set of targets, to verify that the systems are working as expected from consumers’ point of view. For example, an HTTP probe executes an HTTP request against a web server to verify that the web server is available. Cloudprober probes run repeatedly at a configured interval and export probe results as a set of metrics,” the team behind the project wrote on its website.

The project offers automated target discovery for cloud targets, GCE and Kubernetes support out of the box while other cloud providers can be easily added.

It also includes integrations with the open-source monitoring stack of Prometheus and Grafana. It also includes fast built-in implementations for common types of checks such as PING (ICMP), HTTP, UDP, and DNS.

Cloudprober is written entirely in Go, and compiles into a static binary. It can easily be deployed as either a standalone binary or through docker containers and there is no need to re-deploy or re-configure Cloudprober in response to most of the changes.

It has an extensible architecture which enables users to easily add support for other cloud targets, monitoring systems, and a new probe type.