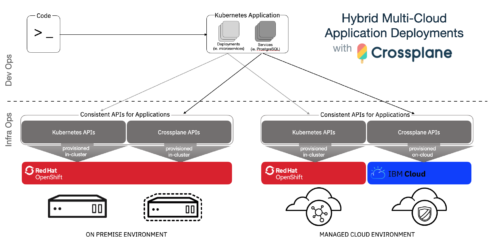 Crossplane is an open-source Kubernetes add-on that is currently hosted at the Cloud Native Computing Foundation as a sandbox project. It is designed to extend clusters with the ability to provision, manage cloud infrastructure, services and apps.

“We built Crossplane to help organizations build their clouds like the cloud vendors build theirs—with a control plane. Crossplane is a CNCF sandbox project which extends the Kubernetes API to manage and compose infrastructure. Operators can encapsulate policies, permissions, and other guardrails behind a custom API line generated by Crossplane while application developers can self-service from the API without needing to become an infrastructure expert,” the Crossplane website states.

It supports infrastructure from major cloud providers and implements the Open Application Model.

“Crossplane has now officially reached version 1.0 with the ability to manage an extensive set of cloud services from the Kubernetes API and compose them into configuration blueprints to define your own cloud platform  – all without writing code,” Phil Prasek, principal product manager at Upbound who founded project two years ago, wrote in a blog post.

Next on the roadmap includes: code generation of providers, multi-language support for compositions and configurations, managed resources, and additional conversion strategies for XRDs.

In addition, IBM recently announced it would be joining the Crossplane community and released an experimental version of an IBM Cloud provider for Crossplane. It will enable users to provision and manage more than 85 hosted services from the IBMCloud Catalog, import existing IBM cloud services and use Go templating to shape credentials.