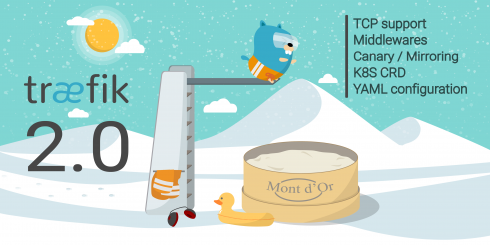 “More than anything, this release shows the importance of the community. Every feature that has been discussed today was born from a user asking for a new feature, reporting a bug, or just asking for “better,” Gérald Croës, VP of Engineering at Containous, wrote in a post.

IT Glue reveals roadmap
IT documentation company IT Glue revealed its product roadmap at its annual user conference, GlueX. It will be introducing several new password-related features, such as Password Folders, The company also announced an integration with QuickPass and a new Dark Mode interface, which it says is one of the most requested features among its users.

“Password management is a critical component of a Security-as-a-Service suite, and we’ve found that many MSPs still have limited visibility into how their customers manage passwords. We’re building a solution that takes the human out of the equation in order to dramatically reduce vulnerabilities,” said Nadir Merchant, general manager of IT Glue. “The addition of Dark Mode was something a lot of partners requested so we’re thrilled to be adding this viewing option to the IT Glue interface.”

“Being on the forefront of the next generation of IoT cellular networks means we can provide effective, easy-to-install IoT solutions to more small businesses than ever before,” said Lewis Wight, chief technology officer for HSB Meshify.  “Our cellular solution eliminates the need to worry about Wi-Fi passwords or Wi-Fi signal strength issues and can be installed in under 30 seconds.”