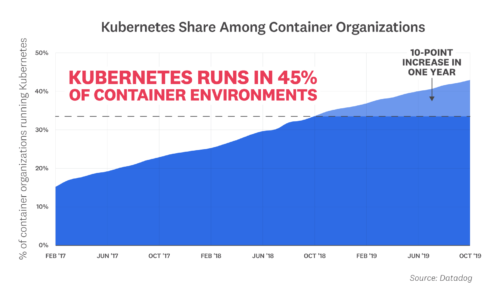 The report was conducted by Datadog and released to coincide with this week’s KubeCon in San Diego. Datadog analyzed over 1.5 billion containers in use by its customers.

“Containers are changing how companies build and run their applications and infrastructure. As containers become more commonplace, they have ushered in more dynamic infrastructure and given rise to a vast array of supporting technologies,” Datadog wrote in the report.

The report also discovered that managed Kubernetes services, like GKE and EKS, have seen wide adoption. For example, on Google Cloud, 90% of organizations running Kubernetes have adopted GKE. “Users of these services delegate Kubernetes Control Plane management to the cloud provider, so they can focus on the workloads running on the cluster’s worker nodes,” Datadog wrote in the report.

Another key finding is that AWS Fargate is being rapidly adopted. According to the research, it is currently used in 19% of AWS container organizations. AWS Fargate allows container clusters to be launched without having to manage compute instances.

Datadog also found that JavaScript is the most popular language used inside containers. Fifty-seven percent of organizations that use containerized workloads use Node.js. According to Datadog, this is double the amount of organizations that run Node.js in non-containerized environments. The company believes that its popularity is a result of its design, favoring lightweight, scalable applications.

The company also revealed that the Kubernetes upgrade cycle is long, with organizations preferring older versions despite the fact that minor releases come out every few months. According to Datadog, the most popular version of Kuberntes in use as of October was Kubernetes, 1.13, released in December 2018.

Other findings are that Kubernetes usage is growing quickly in Azure, NGINX runs in 70% of Kubernetes environment, and that container churn rates are converging across platforms.

Why has Kubernetes been so hard to use?