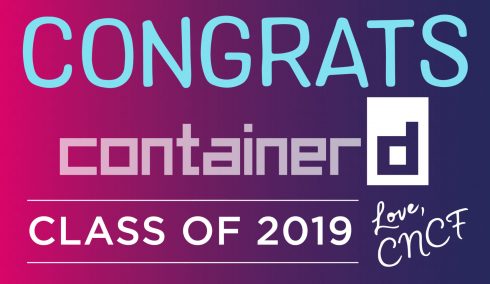 Docker’s core container runtime containerd is the latest project to graduate from the Cloud Native Computing Foundation this week. It has been more than two years since Docker decided to spin out the containerd runtime and the project joined the CNCF. Today’s announcement makes containerd the fifth project to graduate, following in the footsteps of Kubernetes, Prometheus, Envoy and CoreDNS.

When Docker decided the container runtime project would become a standalone open-source project at the end of 2016, its goal was to eventually donate it to an open-source foundation. CNCF officially welcomed the project as an incubating project in March of 2017. In order to go from incubation to graduation, projects must show the ability to thrive, adopt, and commit to community sustainability and inclusivity, the CNCF explained. In addition, it must demonstrate diversity and a formal governance process.

“After being accepted into CNCF nearly two years ago, containerd continues to see significant momentum – showcasing the demand for foundational container technologies,” said Chris Aniszczyk, CTO of the Cloud Native Computing Foundation. “A lot of work and collaboration from the community went into the development and testing of a stable, core container runtime, the community worked hard to broaden its maintainer and adoption base, on top of going through a external security audit so I’m thrilled to see the project graduate.”

Containerd started out at Docker as a lower-layer runtime manager. Today, containerd has become an industry standard container runtime with a focus on simplicity, robustness and portability. It is currently available as a daemon for Linux and Windows. It has had 14 committers, 4,406 commits, and 166 contributors since its inception.

“When Docker contributed containerd to the community, our goal was to share a robust and extensible runtime that millions of users and tens of thousands of organizations have already standardized on as part of Docker Engine,” said Michael Crosby, containerd maintainer and Docker engineer. “It is rewarding to see increased adoption and further innovation with containerd over the past year as we expanded the scope to address the needs of modern container platforms like Docker platform and the Kubernetes ecosystem. As adoption of containerd continues to grow, we look forward to continued collaboration across the ecosystem to continue  to push our industry forward.”