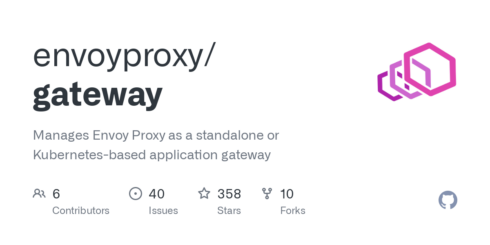 Envoy Gateway makes using Envoy Proxy easier for developers and helps to reverse fragmentation as part of a new effort within the Envoy proxy open-source project to simplify Envoy use in cloud-native application development.

Envoy Gateway will reduce existing, redundant efforts around Envoy and make it much easier for application developers to use Envoy as a basic API gateway “out of the box” and as a Kubernetes Ingress controller.

The tool exposes a simplified set of APIs implementing the Kubernetes Gateway API making it easier to extend Envoy. Envoy Gateway will not replace API management features that are currently found in commercial products.

“Envoy has achieved a great deal of success since we first released it in 2016,” said Matt Klein, founder of the Envoy proxy project. “And the community has been at the heart of Envoy from the beginning. With the community-driven Envoy Gateway project, we see the opportunity to make Envoy accessible to many more users through the addition of simplified APIs and new capabilities explicitly targeted at north-south / edge proxy use cases.”