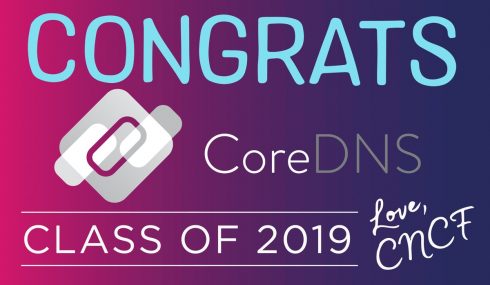 The modern DNS server for service discovery in cloud-native deployments is graduating from the Cloud Native Computing Foundation (CNCF) today. CoreDNS is the first project to graduate from CNCF this year, and follows last year’s graduates: Kubernetes, Prometheus and Envoy.

In order to reach graduation, projects must demonstrate maturity, thriving adoption, diversity, commitment to community and sustainability, and provide a formal governance process.

CoreDNS was first created by a Google site reliability engineer in 2016 as a way to address traditional DNS limitations. The project joined the Cloud Native Sandbox in 2017 and moved to an incubating project in February 2018.

Today, it provides backwards-compatibility as well as extensible integration with Kubernetes. Version 1.13 of Kubernetes actually recommends CoreDNS as the default DNS for deployments, according to the CNCF. In addition, it supports native cloud integration and hybrid cloud environments with AWS. The team plans to add Google Cloud DNS support in the future.

The project has more than 100 contributes, and is used in many projects outside of Kubernetes such as Bose, Hellofresh, Skyscanner, SoundCloud, Trainline, and Zalando.

“CoreDNS has been a part of CNCF for nearly two years and has been cultivated by the community to reach graduation and officially serve as the DNS server for Kubernetes,” said Chris Aniszczyk, COO of CNCF. “Also, CoreDNS is a fantastic standalone DNS server that continues to be used in more environments – we’re excited to continue to support the community as it grows.”

“Since joining CNCF in early 2017, CoreDNS has been able to see fantastic community growth and amazing uses in production,” added Yong Tang, CoreDNS maintainer. “We’re incredibly thankful to CNCF who has helped make CoreDNS a successful project, and look forward to working with CNCF to continue the growth of our community.”