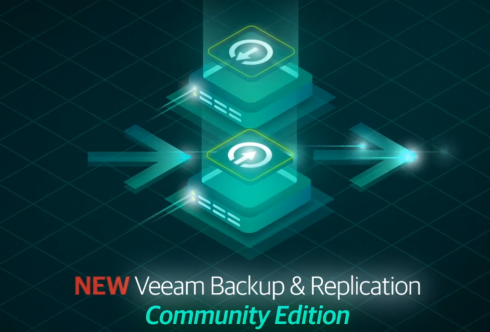 Users can backup and replicate up to 10 of their VMware, Hyper-V and AHV virtual machines for free with the release of Veeam Backup and Replication Community Edition. The company says that the new offering replaces the now-cancelled Veeam Backup Free Edition and opens up new capabilities to free users.

The company wrote in a blog post that the biggest “game changer” addition in Community Edition is the ability to secure physical servers and workstations. This includes agent-based backups for Windows and Linux systems that can be deployed to the desired physical (or cloud-based) machines.

With the ability to replicate virtual machines and “have an exact copy of the VM in a ready-to-start state,” Veeam says the platform can help achieve low recovery time objectives for critical VMs by letting users spin up the VM without a backup server available.

“For workloads with less strict RTO requirements, the new ability to utilize backup copy jobs is useful in helping achieve the 3-2-1 rule,” the company wrote. “The 3-2-1 rule states you should have 3 copies of backups, on 2 different media, one of which should be off-site. By being able to copy your backups locally, or to a remote site, you can be sure you’re prepared for the worst.”

The Community Edition also supports application-aware backups with Veeam Explorers for Microsoft applications, which keeps users from having to roll back entire system images. Instead they can recover bits and pieces from individual applications running on a physical or cloud system. It supports Microsoft Active Directory, Exchange, SQL Server and SharePoint.

When users exceed their 10 free VMs, the company is including unlimited storage for archived virtual machines using VeeamZIP.

“Once 10 instances have been consumed, you will no longer be able to utilize the extended functionality included in Standard edition and when you try to run additional backup jobs, they will fail stating that the license has been exceeded,” the company wrote. “…And for the rest of less important VMs, you can still use VeeamZIP! If you are not familiar with VeeamZIP, it’s a simple way to take an ad-hoc backup of a VM. VeeamZIP will retrieve the VM image, compress it and store it as a full backup file (.VBK), acting as a single restore point.”