If more of your budget has been going to Kubernetes-related cloud costs, well, at least you’re not alone. A newly released survey and the first of its kind from the Cloud Native Computing Foundation (CNCF) is shedding new light on just how fast – and just how much – Kubernetes-related spend is increasing for the majority of organizations. The rush to cloud native architecture has been well-warranted to accelerate application development, but controlling costs is not coming easy.

The new “FINOPS for Kubernetes” survey, conducted in April and May, took input from a cross-section of SRE/DevOps engineers, software architects, developers, and IT management from businesses large, small, and across industries. The surprising takeaway from this survey: at most companies, the soaring Kubernetes costs are fully untethered from any ability to really monitor or control that spending.

It’s not for lack of want. While 66% of respondents characterized the ability to predict their monthly cloud bills as “very” or “extremely” important, fewer than 20% report having any capabilities in place to make such predictions within a 5% margin of error. On the other end of the spectrum, 21% don’t (or can’t) predict their Kubernetes spending whatsoever. With no visibility into even how much they’re spending, pinpointing ways to actually rein in costs is proving to be a tall order for most organizations right now.

Kubernetes-related costs are increasing across companies, regardless of their size or industry. A decisive majority, 68% of survey respondents, faced rising expenses in the past year. Half of those are now paying more than 20% higher costs than a year ago, a particularly sharp uptick. Just one in five respondents have managed to keep costs consistent; only 12% were able to lower their year-over-year Kubernetes spending.

Most developer and DevOps teams would probably find nothing particularly shocking about these findings. Rising cloud costs correlate with increased adoption of cloud native architectures, and then scaling up as organizations expand their Kubernetes environments. What is revelatory is the gap between reality and opportunity that organizations have to reduce wasteful Kubernetes spending by implementing more granular cluster monitoring and active cost controls. Most of the spending is attributable to Kubernetes-related computing and memory resources, which account for nearly 90% of Kubernetes spend. When it comes to allocating those costs, 40% of tenants are associated with namespaces, and 25% with labels; 20% assign tenants separate clusters.

But whether among the 35% of respondents with Kubernetes bills under $10,000 per month, among the enterprises representing the 10% with monthly spends over $1,000,000, or among the many in between, the power of accurate insights to optimize costs offers a transformative path forward. A deeper understanding of Kubernetes clusters and usage can not only save a company money and increase the impact of each dollar spent, but also increase organizational confidence in the efficacy of further spending – and rightfully so.

That said, respondents fell into two decisively separate categories when it came to their progress actually implementing Kubernetes cost monitoring. A full 68% of respondents either use only monthly cost estimates to make decisions, or have absolutely no monitoring capabilities to speak of. Smaller contingents were able to tap into predictive Kubernetes cost monitoring tools. Of these that are further along in their cost visibility strategy, 14% have implemented active chargeback programs, while 13% have accurate showbacks in place.

Respondents with Kubernetes cost monitoring in place took one of three distinct paths to get there. Among organizations opting for cloud provider-specific tools, AWS’ Cost Explorer led the way as the choice of 15% of respondents, with 11% using GCP’s solution and 8% leveraging Azure Cost Management. Among cross-platform tools, a majority of the respondents (13%) selected open source Kubecost as their cost monitoring tool of choice, followed by Cloudability at 9%. Finally, 11% of respondents reported using their own homemade solutions, which included manual spreadsheet-based cost tracking. 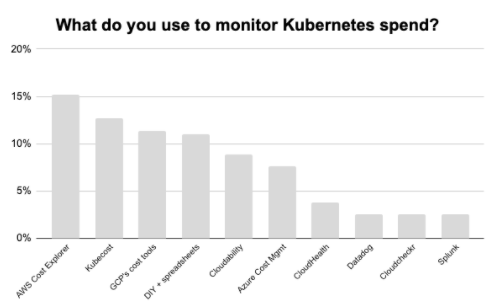 Considering the wide availability of strategies for predictive real-time monitoring and visibility into Kubernetes-related cloud costs, failing to implement a deliberate, actionable cost control initiative is a waste of both money and opportunity. And it will only get more pronounced at scale, and as provider costs tick upward. To keep the cloud native train rolling, organizations must do more to accurately identify the true costs of operating particular projects and environments. They can then perform showbacks and chargebacks, incentivizing responsible cost controls within each department and team. Appropriate budgeting can be assigned at the team or application level as well. Organizations can further streamline spending by better understanding the holistic costs of real-time Kubernetes cluster usage such as CPU and memory, alongside outside costs like S3 buckets and RDS instances. Persistent volumes at the node and pod level also become ripe for optimization once the right insights are available. Automated reports itemizing spending by namespace can further identify trends and recommend decisive action to curtail costs.

Just as organizations adopt Kubernetes to achieve modernized infrastructures and operations, advanced and widely-visible Kubernetes cost control is a quantum leap in efficiency from a budget perspective. Kubernetes related cloud costs may be on the rise for the average organization, but they don’t have to be for yours.

Webb Brown is the CEO and a co-founder at Kubecost

View all posts by Webb Brown