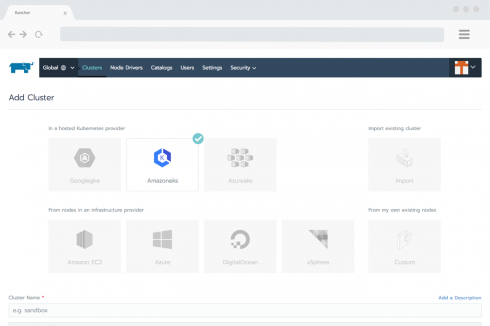 Rancher Labs today announced support in its open-source management platform for multi-cluster global Kubernetes applications, which the company believes will be a big reason for that platform’s uptake going forward.

“The number of production clusters is showing that multi-cluster with Kubernetes is becoming a reality,” said Sheng Liang, co-founder and CEO of Rancher Labs. “Everything could probably be done manually, or by writing a bunch of scripts. But Rancher brings in, how do you authenticate, how do you govern, how do you enforce policies, how do you really automate with minimal change of errors. As a container management platform, Kubernetes fits in really well with what Rancher does.”

“Rolling out Kubernetes at really big scale became an actual problem pretty quickly,” explained company co-founder Shannon Williams. “Part one is, the Kubernetes cluster itself [currently] has to be treated by most organizations as more of an availability zone then as a global service. They just want one cluster. Basically, the software introduces its own domain and boundary that really works nicely when you start to distribute your workload across multiple clusters. The other big reason is, so many of the things many people need to do to operate required them to have agents, and software on every node, whether that’s a security product or a monitoring component. Setting that up as just a global policy, implementing it so that it’s ubiquitous, makes life a lot easier for everyone. One command and these things start to roll upgrades, they take the same approach, you’re not dealing with cluster after cluster. Multi-cluster global apps are I think going to be a big part of growing Kubernetes adoption with more kinds of workloads.”

Adrian Goins, vice president of marketing for Rancher, said that the company’s customers are finding that multi-cluster capability is not only desired by required. “As you grow, the moment you go past a certain number of clusters, it becomes very likely that you will have a least a certain number of applications that you have to replicate across all these clusters,” he said. “And doing it manually is always error-prone, time-consuming, introduces a risk, and the moment they see multi-cluster applications work, the feedback is always similar, that ‘I was just trying to write a script and thinking about how to automate, but it seems like with Rancher, I can just push a button and start doing it.”

Multi-cluster application features are available in the 2.2.0-alpha4 and later releases, which can be downloaded from Docker Hub, and will be generally available in Rancher 2.2 later this year, according to the company’s announcement.